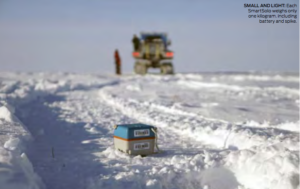 A sensor manufacturer is challenging a crowded land seismic equipment market with what it claims to be a more cost-effective option. Andrew McBarnet records the story so far.

Three years ago, as the recession deepened in the North American land seismic business, Gary Wu sat down with his engineers to figure out whether there was anything they could do to bolster sales in the emerging market for cable-less acquisition systems.

Wu is managing director of Dynamic Technologies (DTCC), a major supplier of seismic sensors based in Calgary, Canada. The company also has manufacturing facilities in Langfang and Shenzhen in China. Wu has been in the business for more than 30 years with stints at leading companies such as FairfieldNodal and ION Geophysical.

“There are a lot of different cable-less products out there,” he says. “But we realised that two key problems had to be fixed to meet the economic realities of the marketplace.”

Those two big considerations were cost and simplicity, Wu says. “Essentially, we set out to design an acquisition package featuring a much lower purchase price and a significant reduction in operating costs, the units being smaller and lighter than any competing system.”

SmartSolo made its debut at the Society of Exploration Geophysicists 2016 Annual Meeting in Dallas. In January this year, a successful fourth field trial convinced DTCC that the system could be launched commercially.

The field test deployed 455 SmartSolo units alongside a similar number of channels of an unnamed but commonly used nodal system. DTCC says its product outsmarted the competition with higher deployment efficiency, faster data harvesting and highquality data comparable with anything acquired from existing acquisition systems. As you would expect, Wu stands by the claims for SmartSolo as a “cost effective and highly efficient tool for running ultra-large-scale high-density acquisition”.

The first batch of systems are expected to be 25,000 channels, but 100,000 channels or more is the target at a purported cost of $100 per channel, or $110 if the central electronics setup is included. Wu says this is far cheaper than current systems available to land seismic operators, but there is a caveat.

DTCC opted for a blind-shooting system, which has inherent cost and operation advantages. It means that SmartSolo units are deployed unattended over the survey area for the duration of a survey recording. They are then picked up and taken to the field operation centre for the data to be downloaded. The batteries of each unit are then recharged before being redeployed on the next part of the survey. 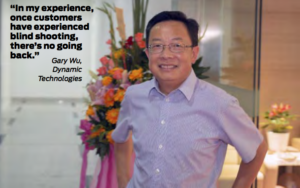 However, there is a natural tendency for clients to want to stay updated with the survey progress. This is why leading players such as Wireless Seismic, Sercel, and Inova have all been working on some form of real-time transmission or data interrogation during the survey.

Wu talks about the “3W” principle of seismic exploration onshore, a formula he came up with. “Once a system meets the 3W standard, that’s enough, no need for anything else.” 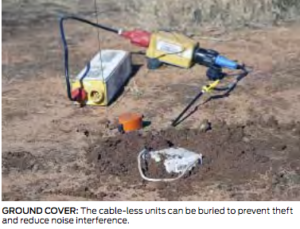 Wu explains: “We think the development of wireless systems with real-time data features has not focused on what really matters. They are communication systems looking to get data back to a central recorder in real time enabling the operator — and customer — to immediately quality control check the acquisition as it goes along. It is an attractive proposition. But the critical component in providing good data is the geophone and its sensor, and the technology in many cases has not been updated.”

The result in Wu’s view is that there is no guarantee of good data from the equipment. The number of channels is limited by the communication media being used, for example radio technology, and such systems are expensive to deploy and operate.

One big difference for Wu is that DTCC is in the sensor business. “We already sell our regular Solo product line into the equipment used by many key North American operators, so we are a known entity. Also, our manufacturing base in Shenzhen is in the heart of a major tech centre so (we have) access to an excellent pool of talented engineers.” 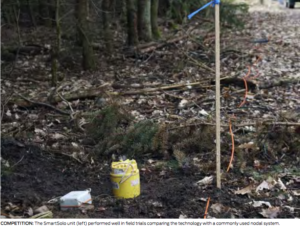 When and where As the name implies, the SmartSolo design is said to benefit from the latest electronic and software technologies of the mobile internet era. There is a smart phone app for deployment and technical support in the field. This helps to explain the other two Ws, the When and the Where. When refers to the sophisticated electronics ensuring that the timing of survey shots and their recording are in sync, essential when it comes to processing the data.

The Where is all about location and logistics. SmartSolo is small and light, weighing one kilogram per unit, including battery and spike. It can be easily buried if ground conditions allow. This lessens the chance of the equipment being stolen or vandalised, a common occurrence in land seismic, and better controls noise from wind and other extraneous factors.

In practice, a survey vehicle transports the racks of SoloSmart units to an accessible distance from the location stipulated. Each crew member can then comfortably carry two packs, which correspond to 20 channels.

Once at the required spot, it is a simple task to set the unit up. This involves running tests to ensure the integrity of the satellite connection for GPS, and check the electronics and sensor operation. Once the system indicator light turns from red to green, it is good to go. “Our vision is that with minimal training, the crew can deploy the system and leave without worrying about it until it is time to recover the units for data harvesting,” says Wu. 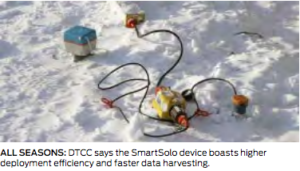 In the collection process, units are placed on custom racks at the control centre for downloading the stored data and recharging batteries, which have a 50- day operating life in normal temperature conditions.

Wu agrees that the blind shooting option is not always an easy sell, although it probably makes up 40% of the market.

“In my experience, once customers have experienced blind shooting, there’s no going back. Obviously real-time QC makes sense if it can be made to work cost-effectively, but in my opinion data quality and scalability are more important.”

Although SoloSmart is entering a crowded market that includes Nu-Seis, another blind shooting system introduced recently by Houston-based Geophysical Technology, Wu is buoyed by the extent of interest already been shown for his product.

“Most of the equipment out there is quite old so we are coming in at the right time,” he says.

He sees scope for penetrating the shale boom in North America, as monitoring of hydraulic fracturing is an obvious fit for SmartSolo. He is also trying to wean companies in the Middle East off their traditional dependence on cable based land seismic, believing that cost and flexibility in the shooting of target areas could be attractive.

For Wu, therefore, there is much more than blind faith. “Basically we don’t think there is a limit to where we can take this system.”